This is a great space for an announcement or special offer.
You are here: Home / Dye techniques / Historical Herbal Dyes for Clothing and Fabric

Historically, herbal dyes were the only source of colorant for most of the population. Many of these herbs were neither colorfast, nor washfast, yet they were still used and enjoyed. Re-dyeing, and over-dyeing are just as useful to the experimental natural dyer today, as they were before the advent of chemical dyes.

I’ve had some feedback concerning advocating natural dyes that are local to me, but are not as colorfast as imported dyes. So, I wanted to revisit the history of natural dyes, and natural herbal dyes. Historical herbal dyes were usually crafted from local herbs and plants and not always the most colorfast. Re-dyeing was a consistent, and expected part of the homemaker’s tasks. It’s what enabled kids to wear hand-me-downs for Sunday best, and to refurbish the adult’s good clothing with fresh color too.

If you are creating naturally dyed products to sell, you will want the most colorfast dyes you can source, and afford. Though there are some products where light and wash-fastness is slightly less important, like baby clothing when your main concern is avoiding toxic chemical dyes.

Even tannin based herbal dyes are not light-fast. I dyed a sunhat with tea, and it began fading within a year and a bit of wearing it in Israeli summer sun. It’s expected that natural dyes will fade with sun exposure and washing. Some dyes are worse than others, some fabrics hold dye better than others.

These are a pH sensative dye, indicating an anthrocyanin content. While the author of Wild Color retracted their inclusion in her book, it doesn’t mean you can’t use them for personal use. I would recommend using black hollyhock on items that are easily re-dyed, or on items that only need the dye to hold up for a few months (like updating used and faded baby clothing when you want to avoid chemical dyes with your little one).

Heat dyeing an anthrocyanin dye does not give it the best fastness, as the heat damages the color and tone of the dye. Think about heating purple cabbage, or cooking with purple beans – the heat destroys the anthrocyanins. This is why I’m experimenting with solar dyeing, and also eco-printing, for hollyhock blossoms, to see if it changes the fastness and tone. 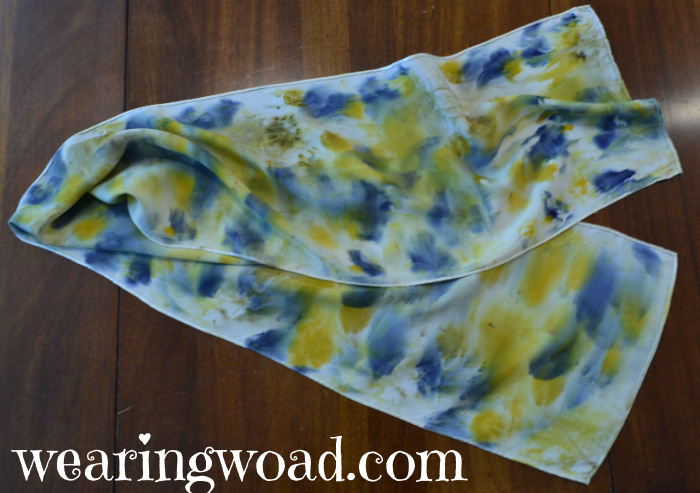 This scarf is an example. I’m also creating samples with plant based fabrics, to see the differences. My main goal is experimenting with what I have around me and on-hand. Current ability to order natural herbal dyes isn’t that great and, when you approach it as an experiment, not that necessary until you run out of things to test. 😉

No anthrocyanin dye is washfast in an acidic state, and only mostly so in basic. So shifting the pH and then washing the fabric will cause the dye to rinse out, particularly in cotton and linen. Protein fibers will hold this herbal dye better than plant based ones. Still, wash in pH neutral soap and gently to help preserve the dye tone.

My case in point for that, for expensive natural dyes, is a cochineal dyed silk slip. While it was a lighter shade of pink, due to being used to exhaust the vat, the color only remained true for about half a year before it started fading. Within two years, it needed a re-dye due to how faded it had become with just hand washing, and infrequent wearing.

Lightfastness in any natural dye, excepting indigo due to it’s chemical structure, is actually not that great. So, no surprise that hollyhocks will fade in lightfastness tests. Even chemical dyes will bleach in direct sun, if left long enough. Just this year, I had a misplaced black sweater that bleached a horrible pink white tone in some sections after being left outdoors for a month. I don’t know if it was in direct sun the entire time, since it sort of went missing at a farm.

The beauty of natural herbal dyes compared to chemical ones, in this case, is that the natural colors fade true, while chemical colors can change completely.

My parents own a woolen baby blanket that is over 30 years old. It was originally dyed with onion skins, and while the bright yellow is long faded, the lingering warm golden tone is still beautiful. Onion skins are one herbal dye that fades true. Wool is one of the natural fibers that holds dye well.

I know of only one dye that will fade completely with no sun exposure or washing, and that is beetroot. St. John’s Wort is another hard-won natural dye that doesn’t remain true for long, and should be avoided. Most other natural dyes do need sun exposure, or multiple washings before they begin to fade.

From a cursory washing of both cotton and silk dyed with black hollyhock, at this point, the slow solar dyeing method appears to improve fastness over a heat based dye vat. I will update my findings again in December, when the baby onesie is actually in use and gets washed more frequently.

What dyes have you avoided due to their reported lack of colorfastness? Would you like to learn more about the color constituents of plants (anthrocyanins, flavanoids, and others) to help you understand why some dyes are fast and others are less colorfast?

Leave a comment, I would love to hear from you.