This is a great space for an announcement or special offer.
You are here: Home / Sustainable Clothing / Bioregional colour / The Woad to a Sustainable Blue Part Nine: How to Grow Woad

We have already covered several of the unique properties of woad, including its dye color, its versatility, and now we get to its adaptability. Woad’s origin might lead one to believe that it is a fragile plant, though nothing could be further from the truth. It is an amazingly hardy plant, and one that adapts faster than nearly any other plant variety I have encountered. Growing woad is easier than growing a spring salad.

Woad is originally a native of Turkey, southern France, and the Mediterranean region. Grown and harvested in these warm climates for millennia, one might think that woad would have a challenge in colder climes. How woad traveled, I do not know, but woad now flourishes in Europe from the north of the U.K., to Norway, even back down to the Mediterranean.

Where I live, the conditions are probably closer to that of a cold climate like northern Scotland or Norway, than to southern France. Now, seed will acclimatize to whatever climate it is grown and harvested in. Thus, while seed sourced from a warmer climate might struggle, its offspring should manage just fine.

In my experience, the woad seeds sourced from Southern France and Southern England flourished in my climate, while the woad seed from Norway barely handled the summer. Now, I am pretty sure that Southern France does NOT get summer frost, so why was it so hardy? I would attribute it to the inherited adaptability in the woad plant.

Choose a garden area with full sun. Soil quality is less important compared to preparation. Woad does well in both rich, and poor soils. Woad’s roots can help break up clay soils and improve them.

Prepare and till soil to a depth of 6 inches. Till in compost as you would for any garden space. Woad seed is best spaced at 2 inches. You can thin the plants later. Space rows at least 6 inches apart and mulch the area between rows heavily.

I do not thin my woad, but just let the plants grow. Closer spaced woad plants makes it harder for weeds to infiltrate. I recommend using a heavy hay mulch, at least 6 inches thick, to keep weeds from growing in between your woad rows. Heavy mulch also encourages worms, improves the soil, and reduces water usage.

Water heavily after planting, and keep the woad seed well watered until germination occurs. Remember, woad seed has a germination inhibitor on the seed coat. This is what makes it dangerous as an invasive species. The seed hibernates until growing conditions are ideal.

Water, weed, and care for as needed for the rest of the growing season. Remember, leaf volume does not equal color volume. Growing woad that is stressed produces more indigo precursors than woad that is pampered. Don’t be afraid if your woad gets some insect damage, or frost, it’s a good thing.

Growth wise, woad is one plant that puts to death the myth of the need for ideal conditions. Whether protected from frost, or exposed to it woad will flourish. There are only a few factors that really seemed to benefit the woad plant.

First, plenty of water after planting. Woad can be planted at any time in spring. I plant it at the same time as the spring peas. I recommend planting while you are still getting plenty of rain. Woad seeds contain a natural germination inhibitor. The seeds will not germinate unless there is enough water to wash it away.

Woad’s taproot can handle lower water in the summer. However, as with all young seedlings, watering well while they get established is essential.

Second, full sun is needed for a good indigo harvest. In my experience, growing woad plants that were protected from frost had a row cover over them. The row cover blocks some sunlight, and the plants had a lower indigo yield. The plants in full sun, and had frost damage, gave better color and indigo yield compared to covered plants. Woad plants will also produce more seed when in full sun.

Third, mulch deeply and well. Woad plants love their mulch and it makes weeding easier. I recommend 4-6 inches of hay mulch, placed between the rows at planting and added to as the plants grow. This prevents weeds, conserves water, and improves the soil over time. Worms love a good mulch too, which is an added benefit to your soil. 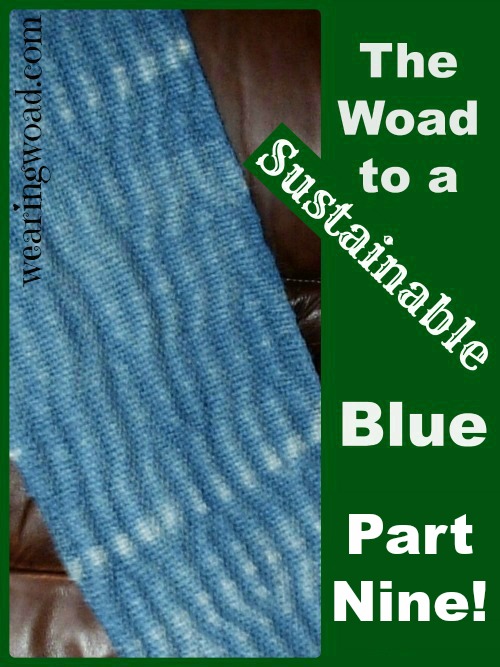 There is no hard and fast rule for natural dye harvesting. Plants need to have leaves a minimum of six inches long, and have at least thirty to forty leaves per plant before the first harvest. The first harvest should take a third to half of the leaves on any given plant. As long as you do not take the small leaves in the center of the plant, woad will grow back within the month. Once the leaves have grown back you can harvest a second time. Warmer climates can have three or four woad harvests per season.

The indigo yield is slightly higher when the woad plants have enjoyed a week of uninterrupted sun before harvesting. The yields after a week of cloud and rain are lower than that after lots of sun.

Note: Second year plants also contain indigo and the yield can be improved if you let the over-wintered plants have a week or two of the spring sun before harvesting. This second year harvest can be done one of two ways. Either you can harvest like a first year harvest, and leave the roots in the ground. In which case the seed stalks will arise and flower. Or, you can dig out the whole plant and carry it to your dye pot, and then pull the leaves off the roots as the extraction process proceeds. The second method will prevent seed from being saved.

Hence, due to woad’s creative adaptability, the process of growing and saving one’s own seed requires caution. We don’t want to get this fun and amazing plant on the banned list.

Choose your strongest two or three woad plants just before winter. Mark which plants they are, either in your garden journal or by a mark beside them in the garden itself. In spring, or before frost, remove all other woad plants and only leave the selected strongest plants to overwinter. Mulch these plants well to help prevent any unfortunate non-returns in the spring.

Each woad plant will produce a surprising amount of seed, roughly a cup of seed per stalk. Hence, let the three saved plants flower and cross pollinate each other. Then, before the seeds on the other plants are mature, choose one to save seed from (it’s crossed with the others remember) and remove the others. When that one plant’s seeds become a dark purple brown, but still have a hint of green, cut down the seed stalk and bring it to a sheltered location to fully dry.

As long as the seeds are partially green, they will not loosen their hold on the stalk. As soon as they are fully ripe and dry, pull the seeds off into a paper bag and store in a cool dry place for next year’s planting.

If you end up with too many seeds, you can always use them in direct contact dyeing. Woad seed will remain viable for up to five years, after which it seems to lose all viability. I would recommend saving new seed every third year, and destroying the remaining old seed after the new is harvested. If you want to do a germination test with woad seed, you will need to remove the seeds from their husks by hand. Otherwise the germination inhibitor will prevent your germination test from succeeding.

Once you have saved seed in your climate, you will notice an increase in the indigo yield and the vigor of the woad plants. As long as you keep at least three plants for pollination purposes, even if you only save seed from one of them, the resulting woad plants will remain strong. If you only keep and save from one plant, however, the woad plant will lose some of its indigo potential and vigor.

Woad is similar to broccoli and other brassica plants in that it is a heavy feeder. However, unlike other brassica plants it grows on a series of taproots, which will drive down up over a foot deep and pull up nutrients from the lower layers of soil. Woad’s taproot will also break up clay soils, and the air that they introduce into the soil along with the mulch around them helps attract worms and other soil beneficials.

Woad flowers are a haven for spring pollinators, as woad begins flowering before many of the summer plants. Its flowers are sweet, and if you have a honeybee hive anywhere within range, you will see them attracted to the woad plants.  Even with just native pollinators, the woad flowers will sound like a bee hive by the sheer numbers they attract.

The garden benefits of growing woad plants are undeniable. However, caution is needed when you are saving seed. After all, it would spoil one’s dyer’s garden to be informed that woad had escaped from somewhere and now you can’t grow it. Woad is our only hardy northern blue dye plant. So, let’s enjoy growing woad, and using it’s dye with joy. After all, the magic of indigo does keep giving back.

Previous Post: « Detecting and Defeating the Enemy of Wool: The Wool Moth
Next Post: Preparing for the Best Year Ever: Organizing, Planning, and Purposeful Choice »