This is a great space for an announcement or special offer.
You are here: Home / Sustainable Clothing / Bioregional colour / The Woad to a Sustainable Blue: Why Does Woad Matter?

With the huge challenges and problems presented by the synthetic indigo dye process, why does the woad plant matter? What point, with the overwhelming size of this problem, can there be to focusing on a simple European plant? And of course, is there really anything that can be done, using the Woad plant, to address this issue?

Short answer, woad matters because it is a sustainable alternative to the un-sustainability of synthetic indigo. While woad may seem a very simple plant, it is actually a very amazing one with more uses than just natural dye. And finally, yes, if we use woad to its full extent as a dye plant, we can begin to address the overwhelming problem posed by synthetic indigo, and other synthetic dyes.

This is part two in a series on The Woad to a Sustainable Blue, you can view part one here.

How Is Woad Sustainable:

Woad is a plant that is most productive in its first year, and produces seed in its second year. Leaving only a few plants to go to seed insures a continuous ability to grow and re-grow the dye plot, with woad seed remaining viable for four years.

Unlike trees, or other longer lasting resources, woad plants are easy to grow, easy to harvest and process, and will re-grow for a second and third harvest during the year. While woad itself is an amazing plant, it can also do amazing things for challenging garden soil.

Woad has a deep, branching taproot. Planted in hardpan and clay soils, the roots will work down over a foot to break up those hard soils, providing air and let nutrients trickle down. The mulch applied over woad plants, and any manure applied to them, will mix into and improve the soil at the end of the year. 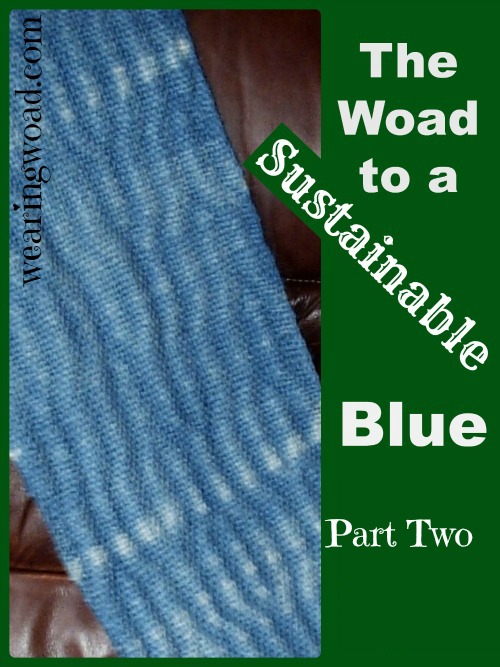 When I first began planting woad, it was rare to find a single earthworm in the entire garden. However, when I dug up the woad plants that winter, excepting my seed ones, I found more than a dozen worms happily hanging out in the roots of one of the woad plants. The worms love the soil loosening, and the mulch related food, that woad brings to the garden.

So, woad improves sup-prime soil. When woad is grown as a dye crop (not as an herb though), it can also be grown in soils that would otherwise be unusable. Soils that have had spills, or other problems, can be used to grow natural dye plants if you cannot grow food-crops on them, and the dye plants help the soil rehabilitation process.

The process to extract and dye with woad uses a minimum of chemicals. The extent of the chemical usage is an acid (such as citric acid that is sourced from corn), and a base (such as washing soda), and the reduction compound (usually some form of color remover). Unlike synthetic indigo that has three toxic chemicals just in the dye molecule itself, the natural indigo dye process has only one dangerous chemical and two safe pH shifters for the entire extraction and dyeing process.

While most natural dyes require a metal salt mordant, woad and all indigo blues, actually do not require a mordant due to the dye’s chemical structure. All indigo dye, both natural, and synthetic indigo which is molecularly identical to natural indigo, forms a physical bond with the fabric. The standard natural dyes however, excluding a select few like Walnut and Indigo, require a metal salt to help them form a chemical bond with the fabric. This is why you can “reach saturation” on a piece of fabric, so that it will not absorb any more dye molecules, but you will still be able to over-dye that fabric with indigo if you so desire. Indigo never reaches a “saturation” point. It just keeps laying down layers, like Lego bricks, that get stronger the more it is dyed. This difference in molecular behaviour also means that the dye technique on indigo is different, which I will cover more in depth later on. (link to previous post on WW)

How is Woad Helpful?

Besides its handy gardening helpfulness, and awesome dye potential, woad is also a useful herb. Used for hundreds, if not thousands, of years in Chinese medicine, woad can be useful on many fronts. With different medicinal value being attached to the roots, leaves, and flowers. However, while most European nations focused on woad’s dye potential, they did not use woad as an herb, although in times of famine it was used as a food source.

Unlike some natural dyes, specifically woods, woad is a completely safe plant and is safe for animal (or human, if you really want to) consumption. Indeed, goats are particularly fond of a good woad plant. Although to human taste buds it is a little strong on the mustardy side of the brassica family. And yes, I have nibbled on my woad plants, specifically the flowers – the flowers are quite tasty.

The final benefit of Woad is that it is an exceptionally easy plant to grow. It can grow in the hardest clay soils, and the richest of loams, with equal propensity. While the richer soils may yield more abundant leaves, it is not always the most pampered plants that give the best dye yield. In some of my early experiments, I found that the “non-pampered” woad actually gave far better indigo yields and colors than my pampered and petted plants. A result that was more than a little disconcerting for that science fair hypothesis, though it gave plenty of questions to address the next year.

While woad, obviously, likes its water, mulch, and some tasty (to plants) compost, it can withstand inopportune frost, poor soils, and growing conditions where zucchini faints, with perfect aplomb.

Are There Challenges with Woad?

Woad’s challenges relate to the same challenges that any natural dye would have, the overwhelming lack of time in this day and age. Woad extractions take a minimum of one hour of hands-on time. Preserving the extract can take several hours, spread over several days to a week if you are drying it. While the dyeing itself will often take four or five hours to make sure you have used the entire vat.

One final challenge with Woad is that, if you are in the USA an in the Western states, woad is considered a noxious weed. With threats of it being added to the noxious weed list in BC, due to it being on Washington’s list, even though it has never been found in the wild in either BC or Washington state, there could well be other challenges raising their heads soon.

Do you agree or disagree that woad matters? Leave a comment! 🙂