This is a great space for an announcement or special offer.
You are here: Home / Sustainable Clothing / Bioregional colour / The Woad to a Sustainable Blue: Finding Sustainability in an Unsustainable World

When you look around you, what colour do you most often see? Outside of neutral brown, beige, white, and black, you will probably see blue, green, red, and yellow or combinations of them. Depending on your home décor choices, what store you are in, or what the weather is like, the colors will be in different quantities. However, blue is likely to predominate in most situations. Websites favor blues, and even our daily computer programs, like Word, lean toward a blue theme.

What is it about blue that makes it such a likeable and fascinating color?

I honestly do not know for sure. It may be that, when we are infants, and the sunny and brilliantly cheerful days first begin coming, our eyes notice the silvering blue in the sky and associate it with the sun, and good things. Historically, the fascination of the ocean, a boundless expanse of waves that refused to be crossed or tamed was hidden within a deceptive aquamarine blue.

With the rare, but powerful, incidents of natural blue. One must wonder when and how blue was first applied to cloth. In the historical realm, blue and red were the two colours that impacted wars, colonizing, and revolutions.

In northern countries, the deep navy blue of a wild sea, or the night time heavens, was rare and nearly unobtainable. The deepest shades of blue were expensive, and reserved for those who could afford them, royalty, nobles, and the odd unusually wealthy person. Light blues were more common, obtainable at home from local materials and easily dyed. While in commercial dye establishments, blue was the least favorite of the dyes and dyers of blue were excluded from the dye guilds (probably due to the smell). 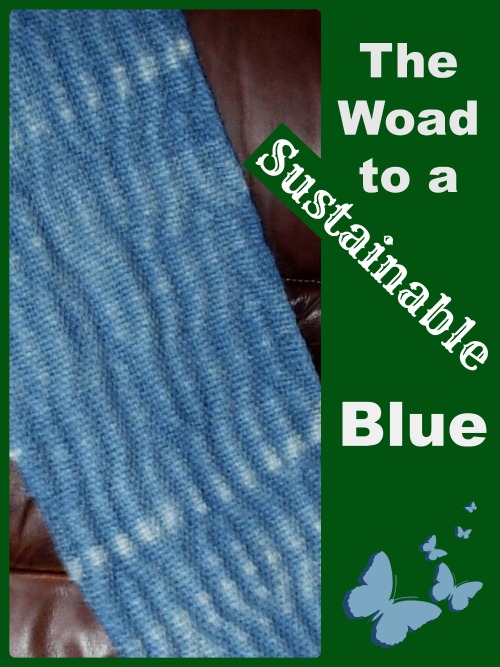 The darkest shades of blue, for northern countries, had to be imported from India and other far-away places. The Indian Indigo was stronger than what they could produce with Woad, and with dark colours an emblem of wealth and status, the Indian Indigo found itself to be quite in demand.

However, with the rapid increase in availability the use of the local woad blue had a corresponding decrease. While it was still used by households, the commercial dyers only used woad as a boost to the Indian Indigo fermentation vat. This action led to a blue deficit during the sea blockade of the French Revolution, not a good thing when your army’s uniforms are all blue.

While purple and red were the first synthetic colors produced, blue was not far behind. Now, blues are among the most prevalent colors from sports jerseys to nightwear, all aspects of life have a hint of blue.

Today, indigo remains one of the most widely used colors. Synthetic indigo is being used by the ton to dye blue jeans and denim, mostly in countries that lack sufficient ecological protocols to prevent land and water contamination. And the fabric so dyed ends up in North American and Western stores, as one of the most common, and often inexpensive, clothing items ever, blue jeans.

While this dye is obviously unhealthy for your body, you can only imagine the harmful impact it has when combined with other chemicals in the dye process, laundering process, and other processes in the making of clothing. Waste water from both the dyeing and laundering of blue jeans has a high chemical content, and if unregulated or insufficiently regulated, these toxins do end up in farm fields and waterways in developing countries, such as Mexico and India.

So, with the lack of sustainability with chemical indigo in mind:

What can we do to be more sustainable?

One of the easiest things to do is to get your denim from thrift stores, or from stores where you know the factories have sufficient ecological protocols in place. In today’s age of throwaway fashion, there is an abundance of clothing available in thrift stores, and second hand stores in North America, and boutiques in other Western nations.

What purchasing from a thrift store does is cut the ecological impact of the garment. Instead of it being a “new” item and a fresh cost to the environment, it becomes an item that is not counted in the “consumer demand” for new things. By keeping the garment out of the landfill, you also delay the final ecological impact of the garment. If you do up-cycling as well as buy from thrift stores, you can keep the impact of individual garments to a nice minimum – and cotton fabric scraps can always be composted for flower gardens, which further reduces the cost.

Of course, the more radical route would be to grow your own blue, or find a source of naturally dyed denim, or un-dyed cotton twill “denim” fabric that you can dye yourself.

Natural indigo has no harmful chemicals in its natural make-up. It can be extracted with non-harmful chemicals, and the dye process can also be completed with a minority of chemical additions. In your body, the natural indigo rub is traditionally believed to have therapeutic effects, or at least no negative side effects of being absorbed through your skin.

Going back to where our colors came from is a step toward a more sustainable future. Indigo is just one of thousands of conventional colors with their original source in a lab. There is still a natural source of Indigo, in plant species around the world. So, join me for this journey to investigate the northern source of Indigo, a plant that can sometimes be found in your own backyard already. Woad.

What steps have you taken to increase your clothing sustainability? Have you ever dyed with natural indigo or woad? What else would you like to know about crafting sustainable blues?

Leave a comment, I love you hear from you.