This is a great space for an announcement or special offer.
You are here: Home / Sustainable Clothing / Bioregional colour / The Woad to a Sustainable Blue Part Ten: Woad Indigo The Traditional Extraction Method

The traditional indigo extraction method for woad, resulted in a product known as “woad balls.” Well, we’ve talked about growing woad, planting woad, woad’s history, and even talked about its amazing and unique color. So, now I guess we get to talk about woad balls! Woad extractions are fun, magical, and have just enough science to make them completely fascinating. Of course, indigo in general is pretty magical, but getting a gorgeous blue dye out of a green plant is just the best.

Growing woad, without knowing how to extract the natural indigo, will not be successful in the dye department. There are, approximately, three different extraction methods for woad indigo. Each of these has a certain success rate, some being more successful than others. There is the historical fermentation method, also known as woad balls, which is nice if you want to do re-enactment, or a natural fermentation vat. However,  the quantity of indigo produced is low. The second method is that detailed in Jameson B Hurry’s book “The Woad Plant and It’s Dye” (out of print) as being developed during the French Revolution. The third method is one that I have worked on in the science experiments, and worked on until my woad indigo yield was higher than that achieved by other known woad producers, solely thanks to the extraction method.

Thanks to the indigo precursors in woad, as mentioned before, the indigo yield can vary in quantity and tone due to the molecular conditions in the extraction vat. This means that pH and timing are the two most important aspects of a successful woad indigo extraction.

Historically speaking, woad indigo was extracted through a long and laborious fermentation process. At the end of the process, the fresh green woad leaves were reduced to woad balls, hard rounds of fermented plant matter. This method is highly labour intensive, and only converts the indican content of the woad leaves. Woad balls are the least indigo productive of the three methods.

For a historical ferment, woad leaves are first harvested, and then ground up on a giant woad mill. Woad Mills were a traditional part of the woad harvest, and usually consisted of a circular stone trough, and a large millstone, either of stone or of wood and iron,  propelled by a horse in the large mills and men in small mills.

After the woad leaves were crushed, they were piled in small heaps to drain. Once the woad was dry enough to be cohesive the piles were pulled apart and formed into woad balls. The woad balls were anywhere from two to six inches in diameter. These woad balls were then dried in specially constructed drying racks, exposed to air movement but shaded, to prepare for storage. Dried woad balls could be stored indefinitely before couching. 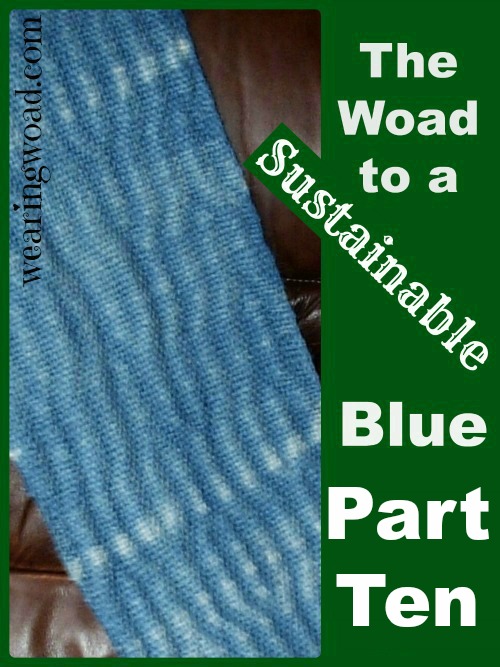 After balling, woad would undergo the couching process. According to Hurry, this is the most difficult part of the preparation process. For couching, the dried woad balls were pulverized and then piled into heaps two or three feet deep. This mass was then sprinkled with water and permitted to ferment. During fermenting, the mass would be stirred and wetted until it became paste-like in its consistency. In the couching process, the temperature of the fermenting pile was not supposed to exceed 125F, and every tiny lump had to be broken up to insure even fermentation.

The couched woad past would then be dried, broken up, and packed into barrels to be shipped to the dyer’s. Hurry states that “Woad was said to improve greatly if it was kept for a while, owing to the action of the ferment, its efficiency in the woad vat being doubled in four years” (page 27, The Woad Plant and It’s Dye). Through the ferment process, the woad was reduced by nine times. So nine kgs of fresh leaves, would only make 1kg of dye paste/powder.

The dye powder was used in the natural fermentation vat. In addition to the woad powder, the dyer also added bran, and potash to the woad vat. Once it was considered ready, fabric was added and the standard indigo dyeing procedure followed. The traditional indigo dye method requires frequent immersions and oxidizations, and sometimes even using multiple vats to get the darkest colors.

Other Aspects of the Traditional Woad Vat:

On the surface of a properly fermented and heated woad vat would be one additional potential product. What is now called “indigo flower” but what was then called simply “indigo.” This floating blue scum would be pulled off and dried for use as a paint pigment, or for other uses where a concentrated pigment needed to be used. Maybe this was how the ancient Picts got their blue tattoos/war paint from woad?

A fermenting vat naturally lowers its pH into the acidic range. The addition of potash would raise the pH and let the indigo fully reduce. If the pH was off, the fabric would be miss-colored, often grey and the vat would have to be re-started. Of course, in the time without litmus paper and pH test strips, it was a lot harder to make an accurate vat when the dye was pH sensitive.

At least, the knowledge was lost until the French Revolution and the naval blockade of France. When, instead of going back to the old way of dyeing with woad, they developed a new way to get the indigo out of the woad plant. This method, in my personal opinion, smells sweeter than the old way. It is also easier to do, and the results are easier to use.

A few woad growers continue to make traditional woad balls. However, they have adapted the dye technique to use a standard reduction vat, in conjunction with leaving the woad leaves in the vat. This method gives blue dye, but the amount of dye can only be shown by the color produced. It also smells stronger than my other extraction method. Smell is no problem if you enjoy the smell of woad.

Have you thought of playing with a traditional woad extraction?