This is a great space for an announcement or special offer.
You are here: Home / Sustainable Clothing / Bioregional colour / The Woad to a Sustainable Blue Part Four: The Modern View of Woad

While woad is a beautiful and complex natural dye color, the plant itself has several prejudices against it. It is a vigorous plant, that will self-seed, and its healthy taproot can make it difficult to get rid of. At the same time, proper attention and precautions taken when growing the plant can prevent the vast majority of invasive tendencies. However, while woad’s vigour is beneficial in marginal growing conditions like I have, it can be much more challenging in warmer, and primer, growing conditions.

This is the fourth part in a series concerning the woad plant. If you would like to see the other parts of this series they are as follows: 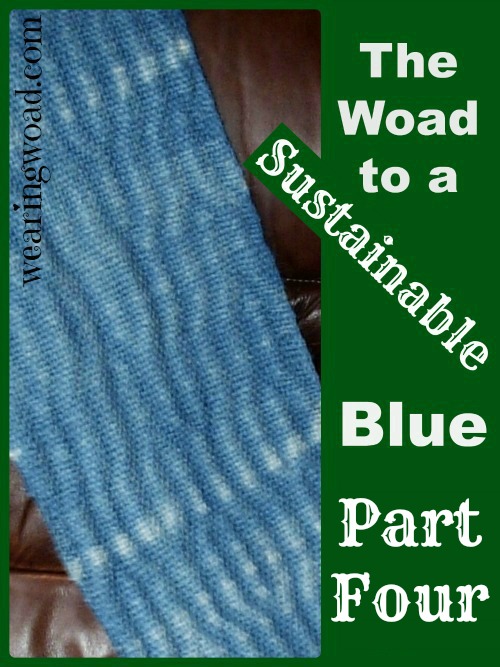 Part one: Finding a Sustainable Blue in an Unsustainable World

Part Two: Why Does Woad Matter?

The Farmers view of Woad:

About the only farmer, in North America, is who wants a woad plant, is one who is also a natural dyer. However the oil extracted from woad seeds has been used in soaps and cosmetics, and has beneficial properties. The plant’s own growing tendencies can be very helpful to break up hardpan and clay soils.

In the south western US states, woad is classed as a noxious weed and in several states, they have events to try and eradicate as much of it as they can. However, they are targeting the second year blossoming plants, and completely missing the first year (dye rich) plants in their efforts.

Woad was an accidental introduction into the flora of the United States. The plant sailed over as an unsuspected seed hidden within the depths of an Irish alfalfa seed shipment. When the alfalfa was planted, no one noticed the little woad plants that began cropping up, until the second year plants went and began to spread the seed over the countryside. Even then, woad would not have become a problem except that this particular woad strain was “bastard woad” a variety with hairy leaves, and which cattle are disinclined to eat.

Dyers woad, the strain that was actually bred for its indigo production, has smooth hairless leaves. And, in old England and France, the cattle would actually be turned into the end of year woad fields to graze during the winter. So, while the “invasive” strain sneaking around the US states is indeed a landrace of woad, it is not the dyers woad of old. And goats, which seem to have less delicate taste buds than cattle, absolutely love woad whether or not it has hairy leaves.

The Dyers view of Woad:

Ask any natural dyer what their favorite natural dye plant is, and you will probably get a arrange of responses, and woad may not even make their list of known or used dye plants. In my mind, woad is one of the most amazing and fascinating natural dye plants around, mostly because it can make far more colours than blue.

Woad is the only plant I have ever encountered, that, with the right dye conditions, can produce the entire rainbow. Woad colours include blue, yellow, purple, rusty orange, green, brown, and even red. You may ask, how is it possible to achieve so many colors from a single plant? And I would have to answer, with a mysterious smile, the answer lies in the vat and accidental experiments.

As a dyer, I love, love, love, the woad plant. No matter which color you achieve from it, whether blue or purple, yellow or orange, all of the woad colors will work together in any setting. You can weave a tapestry, or knit a sweater, with the entire range of woad colors, and the colors will never clash. Not only are the woad colors unique and beautiful, they are also sustainable, local, and color-fast! What more could you want in a natural dye?

The Historians view of Woad

Woad is also valued for re-enactment and creating period appropriate clothing. A woad vat, created with natural fermentation would be exceptional for a Middle Ages, and post Middle Ages, time period. Though, Indigo in general would not have been readily available most families who lived in the country would have known how to make their own blue dye from woad.

While, without a woad mill, there would be little chance of making proper woad balls, one can still make an approximation of them. However, woad balls are not the most effective, or efficient method of preserving woad Indigo for natural dyeing.

Woad is also a little bit of a conundrum. People have suggestion, and nearly as often discredited, that woad was used by the ancient Picts, Scots, and Celts, as a “war paint” or for tattoos. And, while you can make a non-permanent skin paint from the foam on the top of an indigo vat, there is actually no known way to use it for tattoos. The woad plant itself was undoubtedly known and used by these people groups, however, whether they actually used it on their skin, or not, is highly debated.

What is your view of woad? Do you lean more toward one of this views or a combination of them?