This is a great space for an announcement or special offer.
You are here: Home / Sustainable Clothing / Bioregional colour / The Woad to a Sustainable Blue Part 12: Woad our Plant Ally

Woad is one of the most amazing plants. Not only because of its dye content, but its herbal abilities, and its ability to thrive even in face of sub-prime growing conditions like marginal soils and summer frost.

At the same time, many people do not want woad to grow or thrive in their areas. Termed an invasive species, or a noxious plant and toxic to animals, woad has gained a negative rap through-out many areas.

Weed control and noxious plant rangers seem quite concerned with the possibility of woad growing in certain areas. A year or so ago, I was harassed by the local weed control person over having grown woad in the past. The person claimed that woad had been declared an invasive species in BC, and that she “had” to come onto my property to see that there was no woad growing – at all. Now, I checked the regulations, and woad is on a “potential invasive species” list that is based on the Washington State regulations. It’s a potential because it’s listed in Washington even though it is not present in Washington. In BC, it can only be added if it is proved that the plant is present, however I’m fairly sure that the only place it’s been in BC is in dyer’s gardens.

Ironically, that “potential invasive species” list contains a disproportionate number of normal, medicinal herbs. A good quarter of the potential invasive plants are HERBS that the average person would grow in their garden, like normal garden sage. Last time I tried to grow sage, it died, not exactly invasive plant behaviour. 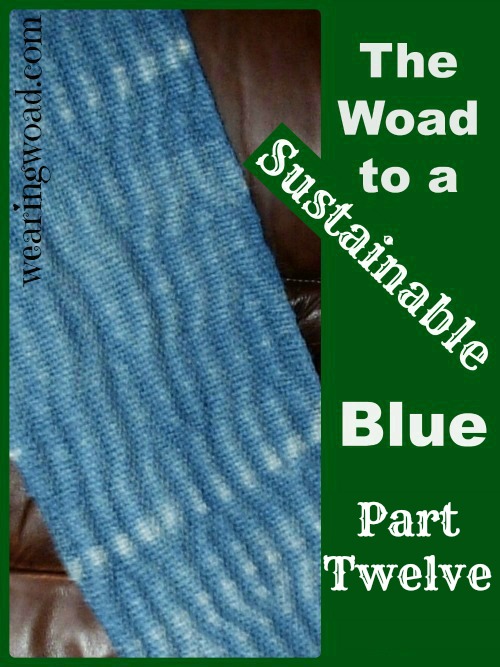 Sure, animals don’t eagerly devour herbs because they wait until they actually need the herb’s properties before eating it. So, if the list is based on what animals are willing to eat and not willing to eat in a normal day, well yeah herbs would not be in their diet unless needed. What I find strange is that plants with known herbal properties are being blacklisted as invasive plants that must be dealt with using toxic chemical soups (aka. herbicides).

So, why are so many herbs on a government invasive species list?

If you are in an area that actually has wild-growing woad, don’t be afraid to wild craft it as a dye from anywhere. Also, you can use wild woad as an herb if you know that the plants have never been treated with toxic chemicals. Alternatively instead of woad, Isatis tinctoria, if you were warm enough you could try a different Isatis spp. the Chinese Woad, Isatis indigotica.

If you can grow woad, of either strain, I would encourage you to think of adding it to your natural dye garden. It is an amazing plant, and well worth the little time and effort that it takes to grow and process it.

Woad In The Garden:

Woad is a puller, and will take a fair amount out of the soil. With a good dose of compost and mulch at the start of the growing season, it can help improve clay soils and other hard packed soil due to its deep taproot. As a brassica, woad should have at least 3 years break before being planted in a place where other brassicas were grown, and same with other brassicas to woad. This will keep your garden soil healthy, and prevent soil born challenges.

Most claim that woad does not produce half as much indigo per kg of leaves when compared to Indian indigo. But, with the right extraction process the difference can be decreased quite substantially. Woad has a faster hand than Indian grown indigo, and has an amazing range of other color potential. I sincerely suspect that Woad is the only single dye plant that can actually give a full spectrum of color, which is quite impressive.

Woad as an Herb:

Woad is a wide-spectrum antibiotic, as well as being anti-fungal, and a broad spectrum anti-viral. Being a natural option for these applications, woad can contribute to health and combat even normally antibiotic resistant bacteria. Remember, no matter how easily bacteria adapt to commercial antibiotics, they never seem to adapt to herbal options. Garlic is still effective and it’s been around for how many thousands of years?

Keeping A Supply of Woad:

Woad seed will remain viable for 4-5 years. If you are saving some of your own seed, which I recommend when done with care, you should grow plants out for seed every 3 years. This will insure you have plants fully adapted to your particular growing conditions, and also insure a constant supply of healthy and viable seed.

I learned the seed lesson the hard way. I had grown woad and saved seed consistently, then stopped for several years due to my other studies. When I again tried to grow woad, my seed was 5 or 6 years old – and out of over 100 seeds I only had 2 germinate and only one survived the summer. That one plant, thankfully, continued to survive and will provide me with seed to continue growing woad. Next time, I won’t wait so long to grow out my seed! Or maybe, I won’t do quite so thorough a job of eradicating the little volunteers next time.

As the first year plants are used for dye, and the fall roots for medicine, you should have no spreading problems. Just leave 3 or 4 plants for seed in the third year, and keep one seed stalk per plant when they flower. Those 3 or 4 stalks should provide you with enough seed for the next 3-4 years planting and harvesting until you save seed again.

In rare conditions, woad can be grown as a perennial instead of a biannual. However, the indigo content gradually decreases when woad is treated as a perennial and not permitted to go to seed (by trimming off the stalks as they try and grow). Keeping Woad as a biannual is probably the best plan for a consistently high indigo yield, and for keeping consistent seed.

I hope you enjoyed the information, and will think about keeping woad alive as a relevant part of natural dyeing, and possibly natural medicine. I hope you enjoyed learning about woad as much as I did when first researching this amazing and awesome plant.

If you have any thoughts on woad, I would love to hear them. Leave a comment.