This is a great space for an announcement or special offer.
You are here: Home / Earth Care / The Woad to a Sustainable Blue Part Eleven: Woad in Herbal Medicine

Historically speaking, dye plants and medicinal herbs often overlapped. A prime example is yarrow, a plant that will dry wounds and halt bleeding, and that doubles as a yellow dye. As time progressed and aleopathic medicine came into precedence, many herbs lost favour as their benefits “had not been tested.” In herbalism, preparations often include more than one herb. A mixture may have six herbs and be effective. But, when those herbs are tested separately the individual herbs can have zero effect. Herbs work together more often than alone. This little fact may well be why many herbs fell out of favor, they didn’t have an “active ingredient” that made them effective, but all the herbs together made each other effective in a homeopathic way.

Woad was one of the herbs that went out of favour, as it was claimed that its effects had been merely that of a placebo (Hurry). However, woad is now coming back into favor among those who know the very real benefits of this amazing little plant. Woad is more than a dye plant. It is also a surprisingly broad-spectrum and useful herb.

Woad was recognized as an astringent plant from the earliest herbal records. Its use was specifically recommended to stop wounds from bleeding, to clear up damp ulcers, and to be used topically as a poultice for internal problems.

Most historical records agree that tame woad, was less astringent and harsh than the wild variety. This may be for the same reason that woad which sustains damage has more anti-cancer properties than woad without damage. The medicinal properties of many herbs are defense mechanisms, and it is likely that woad is the same way.

In the historical herbal usage of woad, it was standardly applied topically. Usually it was applied to open or bleeding wounds, wet or running ulcers, and sometimes as a poultice. When bruised or mashed the woad leaves, applied to wounds, acted to stop the bleeding and prevent infection. Woad would also dry running ulcers, enabling them to heal and preventing further infection and problems from arising.

When used on wounds, over-use could cause excessive scar tissue to form. This is likely due to the astringent effect of the plant partially interfering with healing.

It is noted in the historical herbalism accounts, that even the dye pigment of the woad plant had an astringent effect. Hurry also notes that the human body would remove the dye from the wound, leaving no residual mark outside of the scaring. This observation leads to doubt on what the Picts actually used for their tattoos, as woad seems very unlikely. Though, coating the body with woad before battle could prevent battle wounds from getting infected… hmm.

For topical use making woad oil, by macerating woad leaves in olive oil, will be the easiest way to preserve your woad herbs for winter use.

As early as the 1400s, woad was recognized as an herb to treat tumours, and cancerous growths. It is mentioned by Hurry and attributed to the earliest record of woad in herbalism that he references. However, in Hurry’s record the anti-tumour properties seem to slip the radar and not resurface again until the modern era. 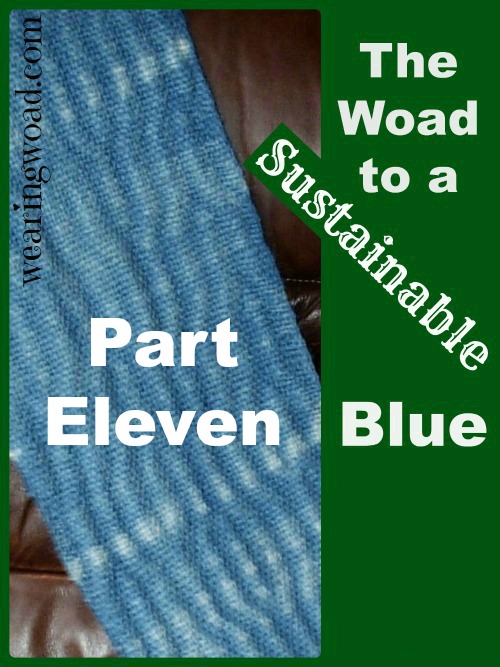 In modern times, woad has been tested for a powerful anti-cancer agent, glucobrassican, which is found in some plants in the brassica family. This anti-cancer agent was originally recognised in broccoli and broccoli sprouts, but the woad plant contains more than 10X the amount that broccoli contains. And, if the woad plant’s leaves are damaged or harvested and permitted to regrow, the amount of glucobrassican in the new leaves is increased by over 35%.

Woad as an Herbal Antibiotic:

Some herbs have antibiotic effects, others are antifungal, and still others are antiviral. Some even combine two of them, but, woad is all three at once. As an antibiotic and antiviral agent, woad must be taken internally, either as a decoction from the roots, or a mild tea from the leaves.

Caution should be used when taking any herb internally. Prolonged internal use of woad, due to its astringent effect, is not recommended. When trying a new herb, use caution and watch yourself for any feeling of illness or sickness and discontinue use if any negative effects are observed.

For medicine, woad leaves can be harvested at any time from first, or second, year plants. The early summer leaves of first year plants are probably the best, particularly if they have gotten a slight touch of frost due to the coolness of spring.

Roots should be harvested at the end of the first year, just after the first killing frost. Removing roots now will also help you prevent your woad patch from going seed-crazy next year.

If you would like to learn more about using woad as an herb, you can check out Joybilee Farm’s short article here.

If you are interested in how to create herbal medicine from woad, check out this awesome article found on the Herbal Academy of New England.

There is one other thing about using herbs against bacteria. The herbal antibiotics have been around for centuries, or longer, but, unlike conventional antibiotics, the bacteria have not developed immunity to herbs. Hmm, I wonder why…?

Woad is a multi-use plant, which may even have more fascinating properties that we have not yet discovered. Not only does it produce colors beyond blue, but it is an agent against most of our modern illnesses, including cancer, bacterial infection, fungal infection, and those dreaded flu (or worse) viruses.

Had you heard about Woad’s herbal uses before? If you use herbs, would you consider growing woad as an herb as well as a dye?