This is a great space for an announcement or special offer.
You are here: Home / Dye Gardens / How To Plan A Dye Garden Part One: The Colour Palette. 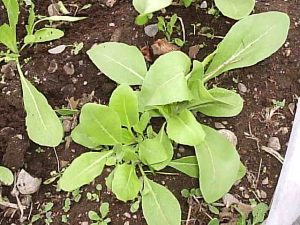 Woad plants - one month after germination

Through January and February, seed catalogues arrive, and people, myself among them, take pleasure in planning the summer’s garden. For me, one of the attractions of garden planning is natural dyes. Natural dyes have a long and colourful history, which, is laden with intrigue, and secrets, much like the history of gold. Like gold, colour has influenced history. However, unlike gold, colour has had a more subconscious influence. Colour was a symbol of rank, the richer and harder to achieve colours, often more colourfast, being reserved for the wealthy, while easily obtained, and often fugitive, colours were for the poor. Among the hardest natural colours to obtain were reds, and purples, in northern climates, a rich navy blue was also difficult to achieve.

When planning a natural dye garden it is important to think both in terms of colour and hardiness. Of the three primary colours two are rare and usually colour fast, the third is common and often fugitive. The two rarer colours are blue and red, the common is yellow.  For yellow the consideration is colourfastness, weld, yarrow, and goldenrod are all fairly colourfast with weld being the most colourfast. For reds, only madder can be grown in northern climates, and requires from three to five years for the roots to mature. Woad is the blue choice for northern climates, however, if woad is allowed to self-seed indiscriminately it will become invasive.

The most common colour, yellow, can be achieved from almost any plant. However, yellow obtained in that manner is usually fugitive. Of yellows the most colourfast is Weld. Many wild and invasive plant species also produce yellows that are fairly colourfast. Prime examples are Mullein, Goldenrod, and Yarrow. Mullein and Yarrow both produce fairly fast and clear yellows, and are common in my area. Goldenrod produces a beautiful yellow but is not as common where I live.  Most plants that give a yellow dye are easy to propagate.  Many will reseed themselves.  Golden rod can be propagated by root divisions from wild species.

Natural reds come from only two sources, insects and plants. Most red insect dyes come from tropical areas.  Madder, a red dye of plant origin, originated in Turkey and can be grown in many temperate areas. In Canada, Madder grows well and produces a orangey red from its roots. There are also strains of wild madder, the bedstraw family, that grow in some regions. However, the wild bedstraw produces finer roots than the domesticated madder plant. Madder beds require between three and five years to grow, before harvesting the roots. From antiquity reds have been the rarest and most sought after dyes. This may be in part because red could not be achieved without something dying, be it a plant or an insect.

Natural blues come from only one plant in the harsh climates, and a large family of plants in the mild and tropical climates. In the north, the blue producing plant is known as Woad, or Isatis tinctoria, and is most readily remembered as the plant with which the Picts painted themselves before battle. Unlike other natural dyes, the blue colour is not found directly within the plant. Instead precursors are found which, during the extraction process, form blue. Also, unlike other colours, blue is formed of only one molecule, the indigo molecule, no matter what plant the indigo precursors are found in.

Woad is a biennial and has done well in my marginal conditions. The first year plant is harvested for colour, while the second year plant produces many thousands of seeds, that have made woad an invasive species in some of the southwestern US states.

What are your favourite natural dyes to grow? Have you had problems finding natural dye seeds, or growing a particular natural dye? Leave a comment.

Previous Post: « 5 Tips for Sustainable Clothing
Next Post: How to Plan a Dye Garden Part Two: Plants for Yellow »