This is a great space for an announcement or special offer.
You are here: Home / Sustainable Clothing / Bioregional colour / How to Plan a Dye Garden Part Two: Plants for Yellow 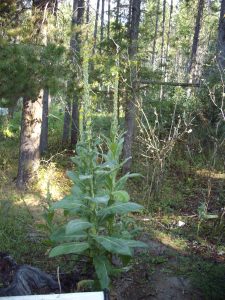 Wild Mullein growing at the edge of a pine wood in slightly disturbed soil.

This is the second article in a series on planning your natural dye garden. Part one was an overview of the colours in the natural dye palette and listed the three primary colours and their prime sources, both wild and cultivated.

Of all natural dyes, yellow is the most common. Yellow is also the least colourfast, and fades in sunlight and with washing. Although swift to fade, yellow fades gracefully and continues to be pleasing to the eye even as it mellows and fades. Plants that produce yellow enjoy sunshine.

Of all natural yellows, the most colourfast, Weld requires rich soil and plenty of sun, as well as a dedicated garden space. Unlike some dye plants, Weld is a biennial and is harvested only in its second year, as a seed stalk. The leaves and stems are dried, and then used to make the dye vat. Weld appears as a rosette in the first year, and in the second year grows to an four foot or  taller spear of dark green leaves with very small flowers. The seeds are tiny and the slightest wind will cause the plant to self-seed after the seeds are mature.   Seeds planted like this in late summer will set seed the following summer, keeping you in weld yellow every year.  Weld was the yellow used, in conjunction with woad, to dye the Lincoln green that Robin Hood’s men made famous.

Unlike regular chamomile, Dyers Chamomile produces a large yellow flower. Both flowers and stalks contain dye, but flowers may be dried for future use.  Harvesting the flowers regularly for dye, will extend the flowering season on Dyer’s Chamomile.   If you desire to grow dyers chamomile it should be placed in a dedicated garden bed. For, like all plants of the daisy family it self-seeds with vigour. Dyers Chamomile is also, like Weld, a very colourfast yellow, and is easy to grow. Dyers chamomile enjoys full sun, and will tolerate poorer soils. The plants themselves are very bright and cheerful during flowering season and give a splash of colour to the garden.

Among other plants the skins of onions are often used by first time natural dyers. The colour achieved can be brilliant, or muddy. However, it does not last, but fades gracefully in sunlight and through washing. Mexican Marigolds are also used for their yellow dyes, but they are frost-tender, so we grow them with protections.

Yellows from the Wild: Annoying and Invasive species.

For those who have access to crown land, or own acreage, or have family and friends with acreage, there is a wealth of yellow growing wild. One of the stronger yellows comes from the moderately invasive plant Goldenrod, whose flowers when fresh produce an exceptionally bright yellow. The plant is easy to grow, with a large container being recommended, Goldenrod’s rhizomes will spread. In the wild, Goldenrod prefers open spaces with disturbed soil, such as vacant lots, recently cleared forest areas, and the sides of trails, logging roads, and other roadways. With Goldenrod it is the flowers, just after they open, that produce the colour.

Growing in the same vicinity as goldenrod and enjoying the same disturbed conditions is Mullein. Mullein produces a light tan to yellow colour from its leaves. Mullein is found in very recently disturbed soils, such as garden beds, and that year’s bare soil. Mullein loves sunshine and can be found in open fields during the spring and summer months, with its distinctive second year spike towering up to eight feet above the fields. Mullein is a biennial and colour is found in both first and second year leaves.

Other wild plants to try:  Yarrow, knapweed, dandylion, lupein, St. John’s Wort.  The flavins that are in the plant that are responsible for the yellow dye potential, are often not soluble at a neutral pH but can be extracted in an alkaline environment.  If the colour seems like a blah beige at first, try adding a pinch of baking soda or washing soda to the vat and see what happens.  Often this will bring a bright sunshine yellow out of the vat.  Be careful not to raise the pH to much, or delicate protein fibers might be damaged by the vat.

Other wild sources of yellow

Yellows are not limited to the field plant kingdom. Also among yellow producing plants are lichens and trees. Where I live, there are many Larch trees whose bark contains a yellow dye. Larch contains an orangey yellow dye. Unlike field plants, tree barks are available all year round. And, although care is necessary to keep from harming a species, those who heat with wood can have a never ending source of bark. Fallen limbs and dead trees can be despoiled of their bark without harming the environment.

Lichens are another source of dyes, although mostly in the brown to yellow range. Among the common lichens in my area are “Wolf Lichen” and the “Horse Hair Lichen.” Wolf Lichen contains a yellow dye, however, wolf lichen is also poisonous and should not be used on anything that a child will wear or play with. Wolf Lichen should also be prepared in a well-ventilated room. The wolf lichen grows in small patches and has brown spots on its predominantly bright yellow frills. Horse Hair Lichen is a brown hairy lichen which grows well on Larch and other conifers, and produces a brown colour.

The best source for lichens is from fallen branches, firewood, or fences that are about to be repainted, as the lichen will be destroyed anyway. Do not harvest lichen from living trees or ground, as lichens are very slow growing and even a 10% harvest could damage the viability of the species locally.

When harvesting wild plants, for dye, always identify the plant, before touching or harvesting any. This precaution will help you avoid harvesting a poisonous or endangered plant species. In any one area, observe the quantity of plant and only harvest 10% of native species. When harvesting an invasive or introduced species of plant you can harvest however much you need.  If you are unsure if a plant is endangered or not and there is not much in an area, keep safe and do not harvest. If a plant does not seem invasive, and is native, you can try propagating it in your dye garden from seed, or plant transplants.

What is your experience with natural yellow dyes? Have you ever tried a wild plant for yellow? What plant sources of yellow do you prefer? Leave a comment

Previous Post: « How To Plan A Dye Garden Part One: The Colour Palette.
Next Post: Woad Part 1: When to Harvest »