This is a great space for an announcement or special offer.
You are here: Home / Creative Spark / Book Review / Book Review: A Perfect Red 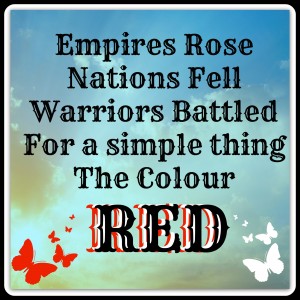 A Perfect Red follows the history of red dye through the ages. From madder and kermes reds to Tyrean purple the path is convoluted, and full of intrigue. Empires grew wealthy on red. Pure reds were hard to find, turkey red being the most expensive of all reds. For the commoner, red was out of reach unless as a very, very pale shade or perhaps some light madder orange if they could grow the plant themselves.

The most colourful chapter in the history of red is that of cochineal. Discovered and exploited by Spain, cochineal remained an enigma for many years. Thought to be a berry, or perhaps an insect, or a combination there was a slew of imaginative conjecturing’s that were accepted as fact.

Amy Butler Greenfield weaves a masterful tapestry of the history of red dye. Part of the history of red is the history of natural dyes in general. Bright colours were difficult to obtain, and usually procurable only by the wealthy. The poor relied on natural coloured fleece and what dyes they could grow. Madder red could be grown in a garden, cochineal or Kermes could not.

Colours like Turkey red, and indigo blue were often expensive. Bright colours were a status symbol, and when synthetic colours appeared it reversed, once everyone could have bright colours, only the nobility wore subdued ones.

A unique thing about red, is that the purest reds were dyed in a many step process. For Turkey red, they would often utilize three or four different red dyestuffs and multiple mordanting procedures.

Today the most famous red dyestuff, cochineal, permeates our food industry. When synthetic red food dyes were discovered to cause cancer, the food industry switched to using cochineal dye extracts for food. So, if you’re eating red candy, Kool-aid, or using red food colouring in baking, you are eating cochineal. And don’t forget, cochineal is like Kermes, it’s a bug.

I would recommend A Perfect Red for any natural dyer’s library. It gives a very clear picture of the history of Red, and even continues into the modern day. If you enjoy discovering information about natural dyes this book is a must-read.

What natural dye books would you recommend? What books have you read and found invaluable? Share your wisdom, leave a comment!