This is a great space for an announcement or special offer.
You are here: Home / Sustainable Clothing / Bioregional colour / Top Three Late Spring to Summer Natural Dyes

Spring is creeping to summer now, and plants are growing their flowers. Among the rich green fields pockets of colour, white, yellow, orange, and purple are forming. Flowering plants, many of them considered weeds, flourish in hayfields, pastures, roadsides, and gardens. Despite their annoying habits many of them are natural dyes as well. 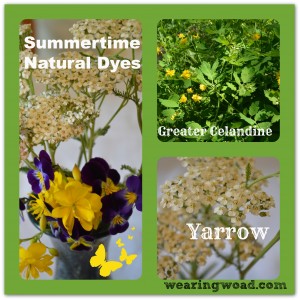 Yarrow: This plant grows around one foot tall. It is an annual which flourishes in dry soils, and open pastures. The leaves are feathery and can grow up to three inches long. Yarrow produces a strong, and bright, yellow which has moderate colourfastness. For a strong yellow from yarrow it is best to use an alum mordant, and rinse in a basic pH. The main colour comes from the flowers, the leaves add a greenish cast to the yellow if used.

Tansy: Similar to yarrow in that it enjoys open fields and dry soils, tansy has dark yellow to orange flowers. Tansy’s leaves are feathery, but not as feathery as yarrow. Tansy will produce a darker yellow than yarrow, but has a similar fastness. Dye technique is the same for most yellows. You can use the whole plant, though utilizing just the flower head will give a clearer yellow

Greater Celandine: I have some Greater Celandine growing like a weed in my garden. I have not dyed with it yet, but have heard that the bright yellow flowers make a good yellow dye. In this case it is only the flowers that are used for dye, but since the plant is a prolific flowerer this should not create a problem

Natural yellow dyes do best on protein fibres, such as wool, mohair, and silk. Some of these dyes can be dried and used for dye during the winter. The dried dye material may not produce the same bright colours as the fresh plant.

What are your favourite summer natural dyes? Have you had any experience with the listed natural dyes, or other summer-time natural dyes? I’d love to hear from you, leave a comment.