This is a great space for an announcement or special offer.
You are here: Home / Dye techniques / Successful Fibre Art: Preparation is Half the Battle Part 3 Prep for Dyeing

This is the third part in the Preparation for Fibre Art series. Part one discussed the washing part of preparation, particularly for fleece, yarn, and fabric. Part two discussed card and combing techniques for working with washed fleece. In part three I will be discussing some particular preparation issues and techniques for dyeing, naturally and synthetically.

Sometimes your fibre just does not dye correctly. The silk lost its sheen, the fleece became course, or the roving felted. Dyeing is an art in itself, and is also part of preparing to engage in fibre art. I do not want to re-hash the washing and other pre-dye preparation information here. You can always refer back to part one of this series if you want to review or reference that information. 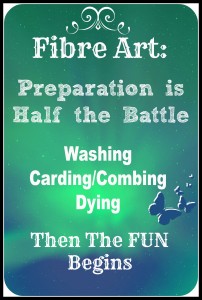 Natural dyeing can be very hit and miss, sometimes the colour is brilliant and other times you end up disappointed. What is worse, is when the colour is amazing but your fibre was ruined. Can you ruin fibre in the dyeing process? Yes, and it is very common when dyeing with reds or blues. Of course, those just happen to be the more expensive natural dyes too.

Top tip for reds is never, ever, ever boil a red dye. Some reds will be destroyed by the boiling while others will actually change colour. Boiling will also felt your fibre, and can cause silk to lose its sheen as well. No matter what colour you are dyeing, and whether it is natural or synthetic dyes that you are using, never boil silk. Some silk can handle a short period of boiling, such as silk noil, but silk fabric, roving, or yarn can have the luster destroyed by heat. When dyeing with silk keep the vat to a low simmer, and heat a tad longer than is suggested (or until exhausted if using synthetic dyes).

Some mordants can also damage the fibres. Iron can eat the fibres over time, and weaken them immediately. As such, Iron is best utilized as an after-bath, or through the dyeing process by using a cast-iron vessel. Iron is generally utilized to sadden the colour, such as turning a yellow to more of a green. Tin is another harsh mordant, not to mention that it is toxic. Tin is best used as a light after-bath, usually utilized to brighten the colours.

Indigo is another dye vat that can end up damaging your fibres. Indigo is dyed with at a high pH, normally 10. Most indigo reduction vats call for the use of Lye, sodium hydroxide. Lye is one of the chemicals often used to burn VM (vegetable matter) out of wool in commercial processes. The use of Lye in an indigo vat can cause the wool to become harsh and scratchy. One way to mitigate lye harshness is to utilize short vat times and frequent oxidization. A second method to avoid the fibres becoming harsh or damaged is to use a different chemical to change the pH, such as washing or baking soda.

When dyeing with roving, always make sure to simmer the fibre rather than boil it. Roving and fleece are prime candidates for “dye bath felt” creations. If roving has felted a bit, but is still loose, it can be reclaimed. You can reclaim mildly felted roving by gently teasing and tugging the fibres until they “slip” against each other and become fluffy. If you tug too hard it can part the roving, so experiment and adjust until you get the right feel.

Has your dye experiments every damaged your fibre? Where you able to reclaim your naturally dyed fibre from the jaws of the dye-bath extreme damage? Leave a comment, I’d love to hear from you.