This is a great space for an announcement or special offer.
You are here: Home / Sustainable Clothing / Bioregional colour / A Work in Progress Part Three: Knitting a Vertically Striped Sweater
This third part is the increase from just knitting a sleeve, to knitting the shoulder and body of the sweater, and the neck division. While the neck division is a touch complex, the rest of the knitting is straight forward and easy-peasy. Part one covers the sleeve and initial cable, part two shows what the sweater style looks like when completed.
You can see the picture on the side has both the current work-in-progress sweater, and the first sweater I created with this pattern (minus cables), finished this spring. Personally, I like the cable and the definition the cabling adds to the sleeve and neck better than the plain stockinette sweater. However, the two pictures will give you a good idea of what the sweater will look like. 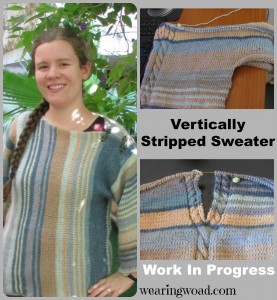 At this point my sweater sleeve is 86 rows long, or approximately 12 inches.

For The Body and Shoulder:

The gauge is 4 stitches per inch, so for a 13 inch increase I need to add 50 stitches on each side of my knitting. If you are taller, or shorter, you may need to adjust this number.
Starting on a knit row, I knit the row and at the end of it cast on an additional 50 stitches. Then, purl the next row, and at the end of that row cast on a further 50 stitches.
You have an increase of 100 stitches and a total of 190 stitches.
The next knit row after your stitch increase should be a cable row. Knit and cable as normal.
Knit, purl, for 3 cable repeats, or 24 rows. That is approximately 4 inches.

After your 4th cable crossover from the stitch increase for the body, knit one row, and purl one row. You are now ready to begin the division for the neck. 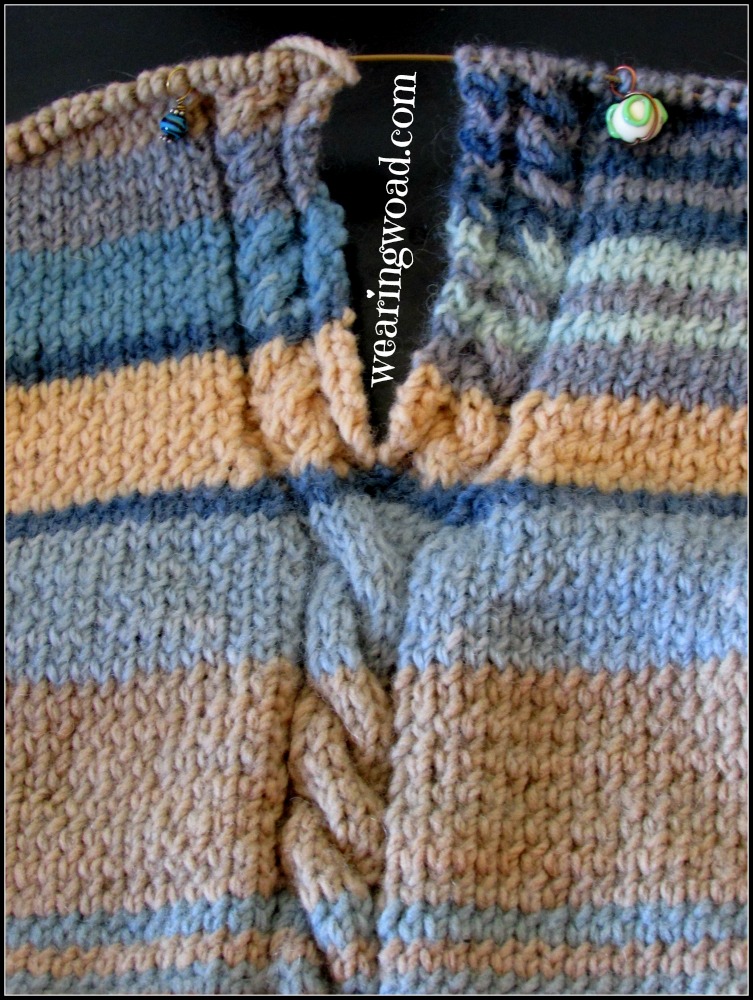 Just before the cable split for the neck, I shifted to my slightly heavier yarn. This, combined with the cable split, and the ability to knit both sides simultaneously is keeping the neck split from stretching the stitches. The first sweater I attempted with this pattern I used a stitch holder, and just straight split the sweater with no reinforced stitching, as a result the stitching stretched and required some crochet to make the neckline decent.
The rejoining of the neck, and cable, will be covered in a week or two when I get to that point of my knitting! I have about 6 more inches to knit before creating the join for the other shoulder.

Are you enjoying this pattern? Are the pictures helpful, or would you like more?
Leave a comment!
Previous Post: « A Work in Progress Part Two: Vertically Stripped Sweater Pictures!
Next Post: A Tale of an Unusual Woad Plant »