This is a great space for an announcement or special offer.
You are here: Home / Creative Spark / Clothing for Preppers: What Will You Do When the Preps Run Out?

Throughout history, families would often make their own clothing. It was not until the advent of the industrial revolution that much of clothing manufacture became mechanized, moving it out of homes and into factories. Factories wanted to cut costs and increase profit, and gradually clothing began to wear out faster, and became less durable. As more and more clothing processes began happening in factories, less and less of them happened at home and the knowledge and skills began to be lost.

I became interested in survival and emergency situations when I read the “SAS Survival Handbook.” While this deals with short term situations, plane crashes or getting lost while hiking for example, many of their techniques and suggestions can also be applied to longer term situations, particularly the clothing creation suggestions. In the clothing creation, the SAS Survival Handbook looks at what is in the local area, palms in the tropics, mountain goat fur or hides in mountain regions and so on, and explains a few ways that these supplies can be used to make clothing. Remember, what is available in your region may very well make the best clothing for said region. 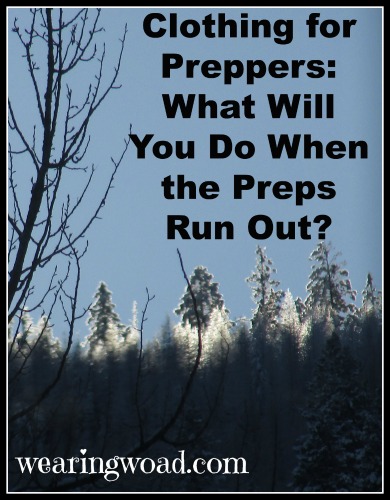 For example: Cotton is not recommended as a prepper clothing choice, in the north. It holds moisture, is damp, and will probably contribute to hypothermia. However, cotton does not grow in the mountains. Cotton grows in tropical climates where its’ cool tendencies are valuable for fighting the heat and humidity. Linen can be grown in the mountains, and its’ cooling properties and sturdy last are awesome for summer wear. Sheep thrive in mountain regions, and their wool is perfect for handling winter cold, snow, and everything else.

You have stockpiled clothing, enough for three years. But, when the grid goes down, you find that clothing begins to wear out quicker than you anticipated. Gardening, food preservation, fire wood collection, and animal raising all take a major toll on your clothing. Creeping to the end of the third year, you find that your clothing preps are nearly gone, and the stores and clothing production is still not back.

In this situation, you have two options. Make clothing out of whatever is available, even if that is sub-prime fabric or fibers. Or, go homesteader mode and make clothing out of fibers that you grew and know how to turn into clothing. At least, this option works if you know the skills. If you don’t know the skills, they’ll be harder to learn after a gird-down situation than before it.

There is, however, a third situation. One where you stockpiled the hard-to-make clothing, boots, or shoes that you knew you would need, and, where you learned the skills and techniques necessary to be able to make your own clothing as soon as the need became present. Then, when the grid went down, you were able to draw on your preps for hard-to-make essentials, and to supplement your wardrobe with sturdy and long-lasting garments. In three years, you may have worn out most of your purchased garments, but the ones you made are still lasting and you have no worries as to how you will clothe yourself even if the grid stays down another three, five, or ten years.

Much of Canada, particularly the western part, was settled by Scots who sailed over after their lairds decided to raise sheep. My great grandparents were among some of the first settlers in the Nelson and Robson area of BC. That is only four generations ago, basically two hundred years. During this time, the Scots were encouraged to immigrate to the unsettled areas, but the English were not so encouraged. Why?

England embraced the industrial revolution before the highlands of Scotland. Thus, the Scots still knew how to spin, weave, knit, and generally survive independent of the industrial grid that had formed in England. The English, now relying on factory industry, no longer had the individual skills necessary to survive, alone, in the wilds of Canada and the USA.

Some of the skills that the Scots pioneers still possessed included, soapmaking, candlemaking, weaving, spinning, knitting, linen processing, wool processing, sewing, and many food preservation skills as well. Their culture had made them equipped to be pioneers, producers, and settlers. Today, basically two hundred years later, our culture has left us equipped only to be consumers. So, what will we do about it? Probably build skills, because knowledge remains with you.

This is the first of a series on essential clothing making skills, techniques, and tactics. Once you know a skill, it will never be lost as long as you continue to practice it. I know how to spin, and even if I don’t spin for several years, the muscle memory remains. Then, when I start spinning again, it is like I just did it yesterday.

When you know the skills you need, no disaster or grid down scenario can take that knowledge away from you again.

The goal of prepping should not just be to survive the short term. Sure, the first three months are the most critical. But, after those are survived – how will you thrive?

Are you preparing only to survive, or are you going to prepare to thrive?