This is a great space for an announcement or special offer.
You are here: Home / Sustainable Clothing / Bioregional colour / The Woad to a Sustainable Blue Part Six: My Woad Story

This is part six in the Woad to a Sustainable Blue series. We have talked about history, non-blue colors from the woad plant, some of the helpfulness of the woad plant, and many other woad related topics. Now, you may be wondering why I have this emphasis on woad (besides that I like wearing woad…), and the answer to that is found in a grade 8 student’s desperate attempts to think of a science fair project for a fair that was in one month.

The Woad to Science:

Trying to think of a science fair project was a challenge. I did not want to do the obvious options, a baking soda volcano, or some such thing. I wanted something unique, that involved fiber, and that I could be passionate about. As it turned out, the only thing I could think of, that fit my criteria, was an indigo vat.

After all, the green-to-blue magic of the vat “looked scientific” and why does it do that anyway? I spent that first science fair focused on Indian Indigo and the dye vat. And, while I had lots of fun and learned a good bit about Indigo and Synthetic Indigo’s toxicity, I also ended up with more questions than I had started with. After ending up at the national level, a surprise for a first time science fair participant, I decided I could either envy the wining projects, or learn from them. And so, after analyzing many of the winning science fair projects at the national level, I decided I needed a more experimental and home-based focus. And for that, I needed woad. 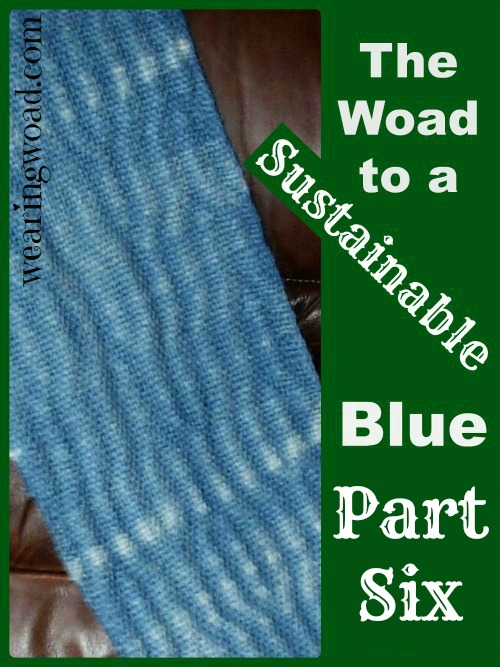 The woad plant, something I could grow, test, and fiddle with to create the necessary graphs for a good science fair project. And, despite the fact that the first time I’d attempted to extract indigo from woad it failed epically, I ended up experimenting with woad for the next two summers. And for those two summers, I had indigo extract EVERYWHERE! The window ledges, tables, and every spot I could possibly use to dry the indigo powder ended up with jars or plates of drying indigo on it.

The Woad to a Science Fair Result:

While I ended up with more questions about the woad plant than I had answers, apparently the judges liked my project since it ended up at the national level for both of those years, and even won medals. I guess I succeeded in learning from the winning projects that first year. After all, when faced with people who are better than you, you can either flat-line or grow, I did my best to grow and adapt.

Am I an expert on woad? Well, if being able to talk about it without stopping for three hours, without repeating oneself counts, then yes. 😉 I focused on it for three years and am still studying it. While some of my earlier questions have been answered, I still have more questions than I started with and I know there is plenty more for me to still learn about this amazing plant.

The one thing I found when studying the woad plant was simple, the more answers I had, the more questions were formed. No matter what I tried in those two years experimentation, I just kept ending up with more questions to ask.

In the end, it seems that the Woad plant is an enigma, but an amazingly useful one.

Woad originated as a Mediterranean plant that flourished in the balmy clime of Southern France and Turkey. Somehow it also ended up in England, Norway, and even California! So, since it flourishes in warm climates, one might expect that it does not like cold climates, and would certainly not like frost.

In the second year, I found that while woad likes a good coat of mulch, extra nitrogen does not necessarily increase indigo yield. It does not mind frost or cold nights, and covered beds usually produced less dye than uncovered beds when all other variables were the same. I also found that, as the seed was grown out in my climate and I saved seed, that those “acclimatized” plants had a better yield and increased vigour too.

In short, as long as you treat your woad plants the same as you would treat any other brassica in your garden, the plants will flourish and produce indigo. The woad plant does like a deeper coat of mulch than is average and the plants themselves attracted a huge number of worms which helps improve soil richness.

However, it is well to note that higher yields do not necessarily mean a better color, or indeed even an increase in the quantity of color.

With an average extraction, the time from field to extraction vat was between 10 and 15 minutes. Higher indigo results were obtained when the time between field and vat was lower as compared to when it was higher. While the plant’s dye potential is large, it is really the extraction methodology that makes, or breaks, one’s yield parameters.

The exact hue obtained from an indigo extraction is nearly as variable as the amount of pigment that is obtained. In the dye experiments (where variables and species were kept separate) the indigo from woad ranged in intensity from a deep navy, to more of an ice-blue shade as the darkest hue.

On average, the smaller the leaf mass available for extraction the lighter the resulting indigo shades. But, this was not always the case. I had several good sized extractions that did not yield as much as I thought they should have, and a few smaller extractions that had a high yield with a fairly dark color indigo.

Now, this may seem strange, however there is a scientific explanation for that case. Simply put, the main indigo precursors in woad are highly volatile and begin to degrade as soon as the leaves are picked. The best woad-indigo extraction method takes the volatility of these indigo precursors into account and is designed to reduce the degradation of these precursors before they are turned into indigo. The main variations in indigo color are caused by the way the molecules bond during the extraction process, a very interesting subject which will be covered next!

What is your experience growing the Woad plant? Have you encountered any of its enigmatic tendencies?