This is a great space for an announcement or special offer.
You are here: Home / Creative Spark / Mordants: Two Natural Dyes that Never Need a Mordant

Sometimes, it is inconvenient in the extreme to mordant fiber. You may not have any normal mordants available, due to running out of mordant, or for other reasons, but still want to have some dye fun. Alternatively, you may not like using metal salt mordants, due to their potential environmental impact, no matter how mild. However, the fast majority of natural dyes require a mordant to retain their colourfastness. Sometimes colourfastness does not matter, as with using a tannin dye or something that you intend to re-dye, or some other temporary project or you are using a readily available dye that can be re-dyed at any point.

However, there are two, or technically three, natural dyes that do not need any mordant to be colourfast. The first of these, you may easily guess, is indigo whether from Woad or Indian Indigo due to its peculiar molecular binding tactic. The second is the dye obtained from walnut hulls, which makes an exceptionally fast dark brown.

Indigo dye, as long as it requires reduction to adhere to the fabric, does not need a mordant. The molecular structure of indigo is such, that instead of forming a chemical bond (as the other natural dyes do with the metal salts and fibers) it forms a physical bond. Thus, if you do not vat, oxidize, and re-vat your fiber when dyeing with indigo, you will not have a colourfast blue. 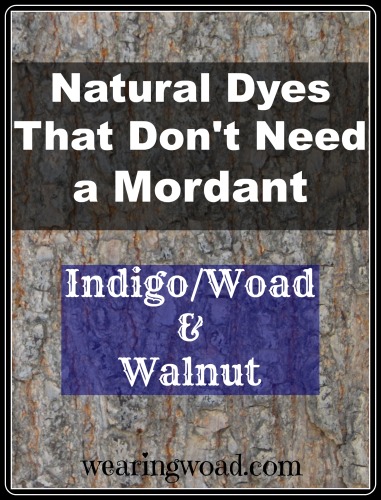 Indigo lays down layers of dye molecules that physically adhere to the fabric. On each re-vatting, another layer of dye molecules overlaps the previous layer and the more layers that are built up, the stronger and more colourfast your indigo will be.

Jeans fade, not because indigo is not colourfast, but because the yarn for denim jeans is only vatted once. The synthetic indigo is not dyed with in the manner of natural indigo, with frequent and consistent vatting and oxidizing, as that would make the color too permanent and apparently people like the “faded denim” look. An experiment in making natural indigo dyed jeans was done, but canned when people complained that the (properly dyed) jeans did not fade.

Woad indigo is molecularly identical to Indian Indigo, though from my knitting experience it has less tendency to leave an indigo bloom on your hands when working with it. Meaning, that it is slightly more rub-fast than the Indian indigo which can often leave a bloom even if you just lightly rub the fabric with your hand. Also, some of the other colours obtainable from the woad vat are also as colourfast as the blue.

There is always an exception to the rule, and indigo is no exception to this. If you intend to use another natural dye as an over-dye with indigo, you will need to use a mordant. It is only when Indigo is used on it’s own that you do not need to bother with mordants or mordanting. However, if you intend to over-dye with yellow or reds, it is imperative that the fabric is properly mordanted before the new dye is applied.

Cotton can also form an exception as, to get the super dark indigo tones, it can actually be necessary to lay down a tannin mordant on cotton fabric. Though this is not always the case, and you can get nice blues on cotton without it. Again with cotton, however, if you intend to over-dye with another dyestuff (or use shibori and over dyeing techniques together) you may well need to premordant the cotton fabric with both a metal salt, and a tannin.

This is an interesting, possibly tannin based, natural dye. It is permanent, and along with Indigo, the only other non-lichen dye that does not need a mordant to remain both light and washfast. As anyone who has harvested walnuts and cleared the hulls off of the nuts will know, if you don’t wear gloves your hands will remain stained until the stained skin dies.

Due to this propensity, walnut was historically used as a hair dye, and sometimes to stain skin for disguises. One of the legends of Robin Hood has him disguise his blond hair and beard with walnut stain, after which he jokes about the clothes being easy to get rid of but not the dye.

While using naturally brown wool fleeces would remove the need for using a natural brown dye, Walnut can still be used if you need to do anything requiring turning white or grey wool to an earthen tone. The browns achieved from walnut are varied, but all have a warm earthy tone whether they are a dark “walnut brown” or a lighter taupe tone.

Walnut dye, when concentrated, can also be used as ink for writing, if you happen to have a fountain pen or want to try using a quill pen. It is also one of the easier dyes to prepare for stamping and other surface applications.

What natural dyes have you used without mordants? Have you found any other natural dyes that were fast without a mordant outside of walnut, Indigo, and some of the lichen dyes?